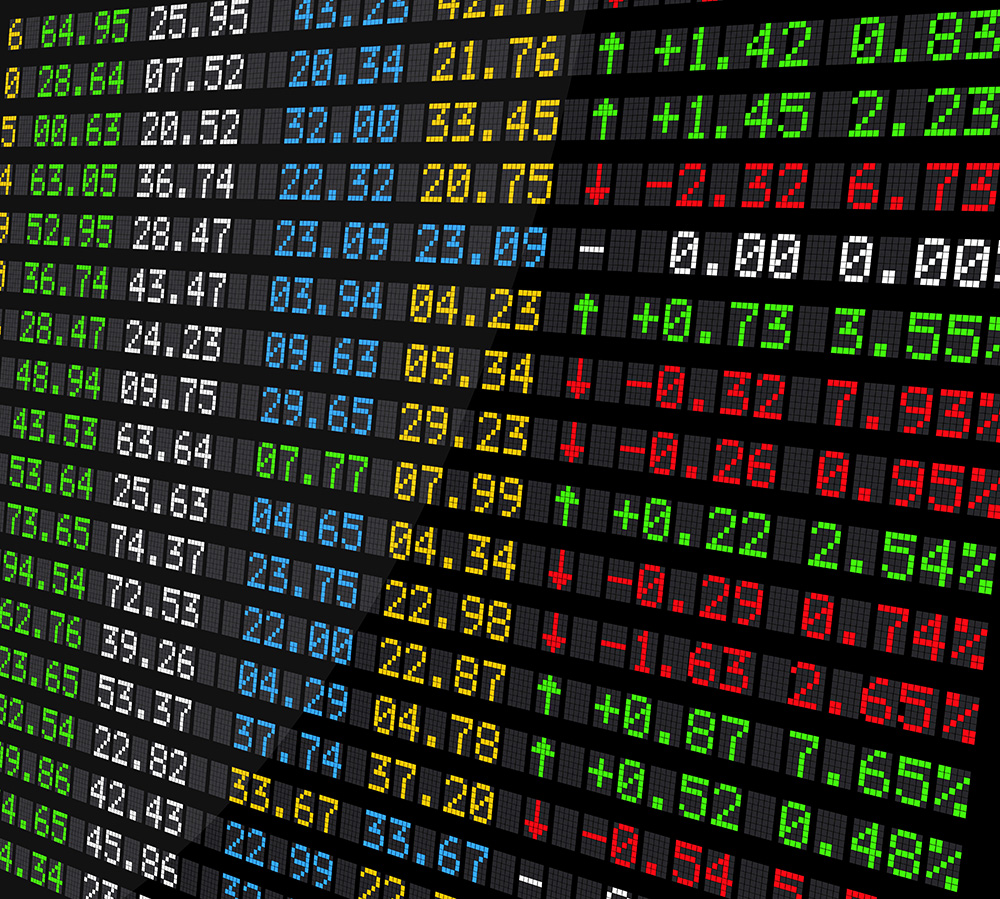 As the authors Norton Reamer and Jesse Downing point out in their work on the history of investment, public markets for securities didn’t exist before the 1600s. In was in Amsterdam, the financial center of the world at the time, where the first real stock exchange developed. In addition, the chartering of the Dutch East India Company in the early 1600s led to the critical invention of the joint-stock company.

Why was the invention of the joint-stock company so vital to the history of investment? Well, for starters, it allowed individuals to buy and sell shares of a company, thus giving them an ownership claim on the company in proportion to the number of shares owned. Perhaps more consequential, though, was its feature of limited liability. The shareholders in the company could not be held legally responsible for the debts of the company. To see why this is so important, imagine that you buy a share of a company for $100 that subsequently goes bankrupt. The most you can lose on your investment is $100. The owners of the company’s debt cannot come after your bank accounts or your house to settle their claims.

With the risk of personal liability removed from the investing equation, stock exchanges sprang up all over the globe. After William of Orange took control of England during the Glorious Revolution, the Bank of England was established to satisfy the government’s need to borrow money at a low rate of interest. As a byproduct of this demand, the markets for public stock trading emerged in the English coffeehouses on Exchange Alley. Despite the advent of the public markets, however, only about one percent of the English population held securities in English debt.

The Industrial Revolution Changes Everything

For most of human history, global economic growth could be summed up in one word—stagnant. But it wasn’t just stagnant; it was virtually nonexistent. As Figure 1 shows, up until the 19thcentury real (after inflation) economic growth per person wasn’t much higher than zero percent. 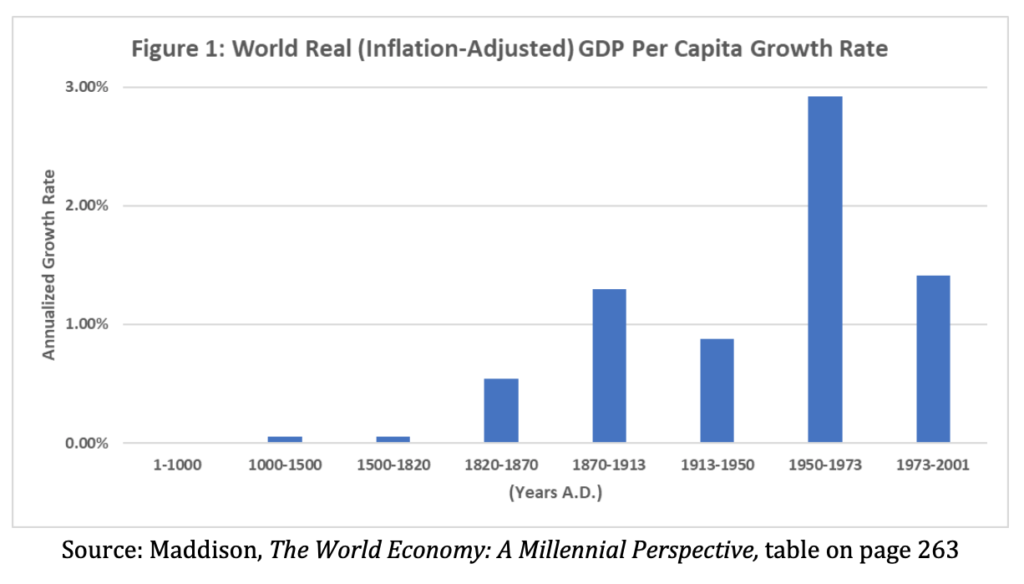 Viewed a different way, Figure 2 shows that the average person didn’t see much change at all to their economic well-being during the first 1,000 years after the birth of Christ. The next 500 years, between 1000 A.D. and 1500 A.D., things started to get a little better. But it wasn’t until the Industrial Revolution (roughly 1760 to 1840) did the average person see a significant change in their standard of living. 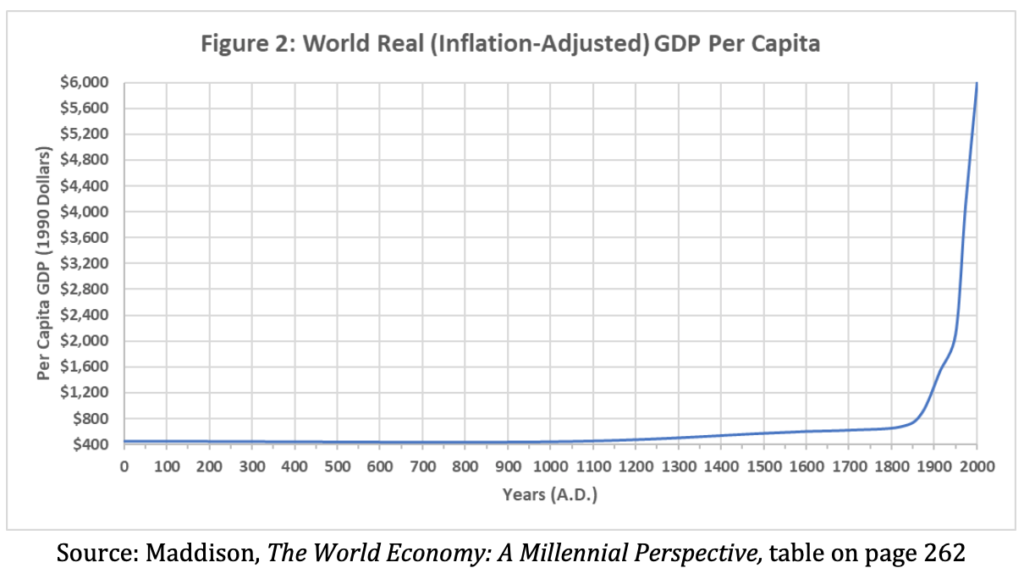 One cannot overstate the impact of the Industrial Revolution on the history of investing. Finally, for the first time in history, the average worker got a raise. Although the savings rate climbed modestly, it was the increase in wages overall that generated the fuel of savings that would ignite an explosion in investment.

In his book, The Birth of Plenty, the author William Bernstein presents four factors that were necessary for this expansion of growth: well-defined property rights, scientific rationalism, liquid capital markets, and fast and efficient communication and transportation. All four of these factors came together in a select few nations around the globe. Finally, the act of investing was obtainable for the average person.

The Advent of Retirement (The Modern Era)

The modern notion of retirement was a foreign concept to most people throughout human history. In the past, when a worker reached her elderly years, she had only two options: work until death or have her children take care of her. Some welfare programs were launched by governments to help provide for low-income workers lacking children, such as the English Poor Law in the 1600s; however, the conditions deteriorated quickly in the cities affected most by urbanization. The bottom line is: you didn’t want to be old and poor in the preretirement era.

Things started to change about 150 years ago when the benefits of industrialization took shape. Between 1880 and 1940, the rate of retirement increased dramatically, driven by the increase in real wages that occurred after the first and second Industrial Revolutions. Studies show that there is a strong link between the decision to retire and the ability to retire. In addition, the share of the agricultural sector in the overall economy declined during this period, leading to a migration of people from farms to cities. As factory work increased, the rate of retirement accelerated.

Insurance companies dominated the management of private pension plans before the Great Depression. When the downturn from the depression hit in the 1930s, these plans were one of the only safe places to store money, so the number of people enrolled in them increased. Their relative success during the depression set the stage for later forms of private retirement plans, the most famous of which was the General Mills corporate pension plan. Established in 1965, this pension plan provided a guaranteed retirement benefit for workers. General Mills hired an outside manager, a group within Capital Research and Management Company, to manage the pension plan’s assets. Thus, the independent pension fund management business was born.

The main takeaway from this history of investing is that the opportunities for investment have been gradually widening over time for the average citizen. In the modern era, this progression has increased more rapidly. Just four percent of Americans owned stocks in the 1920s, whereas nearly half of all households own them today. In 1974, the dollar amount of assets dedicated to retirement was about $368 billion. As of 2013, that number was nearly $21 trillion.

This increase in participation is no trivial fact; it has allowed a large chunk of the population to participate in the economic growth of society. When you invest your savings into a stock or bond, you grease the gears of the innovation machine that drives our capitalistic economy forward; in turn, you are (generally) rewarded for the risk you take.

There is a reason to take pause, however. Companies have moved away from the defined benefit model that General Mills advanced in the 1960s towards the defined contribution model of the 401(k) and 403(b). By the late 1990s, the number of assets in defined contribution plans surpassed those of defined benefit plans. In essence, many employers are passing off the responsibility of retirement management to their employees. Although not necessarily a bad thing, risk has admittedly shifted to the individual, whose investment horizon is much shorter than that of a pension plan.

More skin in the game for the average investor is probably a net benefit. But this brief history has shown that investing has nearly always been a collaborative effort. Whether you were a Roman landowner with a large estate, or an Italian banker financing a trade route across a vast ocean, trust was an essential factor in the investment equation. As the average investor takes the reins of their retirement in the 21stcentury, finding a trusted advisor will be as relevant now as it was 2,000+ years ago.

Past performance is no guarantee of future results. Investing involves risk. Depending on the types of investments, there may be varying degrees of risk. Investors should be prepared to bear loss, including total loss of principal.” (3) I apologize that these items were not mentioned in the previous submission.