So Far, So Good

There is a particular scene I have been thinking about recently from The Magnificent Seven (the 1960’s version).  The premise of the movie is this: seven gunmen are hired to protect a village from a gang of bandits.  The gunmen come into town and prepare for the bandits to return. They train the villagers and prepare for a fight.  As a final preparation, they start moving everyone outside the village walls inside. This includes the village elder. He refuses this move and argues that he isn’t worth the bandits bullets and that these hired gunmen should not worry about him. He does however tell them that they should be worried about themselves.  He asks what they will do when Calvera (the leader of the bandits) comes. In response to this Vin (played by Steve McQueen) quips that the situation reminds him of a fellow back home who fell off a ten story building.  Chris (played by Yul Brynner), intrigued by the comment, asks what about this fellow. Vin tells them that as he was falling, people on each floor kept hearing him say, “So far, so good!”  He then responds to the old man’s question simply, “So far, so good!”

You can see it here:

The reason I have been thinking about that scene is that It reminds me so much of the current state of the financial markets and the attitudes of many participants.  To make the point, let’s look at the following chart: 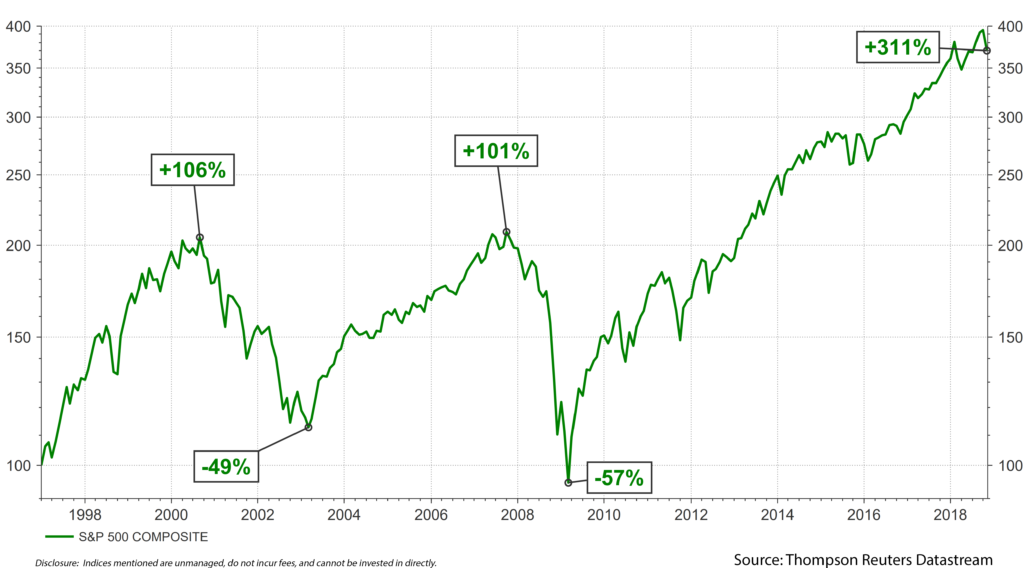 Here we’re looking at the gains of the S&P 500 stock index, which broadly represents US stocks. The peaks and troughs in the index for the past 30 years along with the gains and losses for each of the bull markets and bear markets in between these peaks and troughs are identified. What is clear about stocks from looking at this chart is that they move in cycles.  We don’t know how long these cycles might last or what precisely might cause them to change, but inevitably, after a period of good comes a period of bad.  As a bull market unfolds, it can be easy to tell yourself, “So far, so good!” after each successive year of gains.  In fact, it gets easier and easier to tell yourself that the more years that have gone by.  However, this is not a strategy.  Simply assuming that since nothing bad has happened so far, that nothing bad will happen in the future does not often end well.  Vin’s joke in The Magnificent Seven doesn’t say how things end for the guy falling off the building and it doesn’t have to.  We know how it ends.

None of this is to say that stocks are going to crash tomorrow (there is expression which says that bull markets never die of old age).  However, it is to say that you should always have a plan for dealing with the things that are inevitable.  We know stocks will go down at some point and we should be prepared.  There are lots of ways to do this and that discussion is beyond the scope of this post.  For now I am just hoping to get people to change their thinking from “So far, so good,” to something more like, “hmm, I wonder when this will end and what that looks like for me.”  It isn’t as easy or as catchy, but it might help you land on your feet.