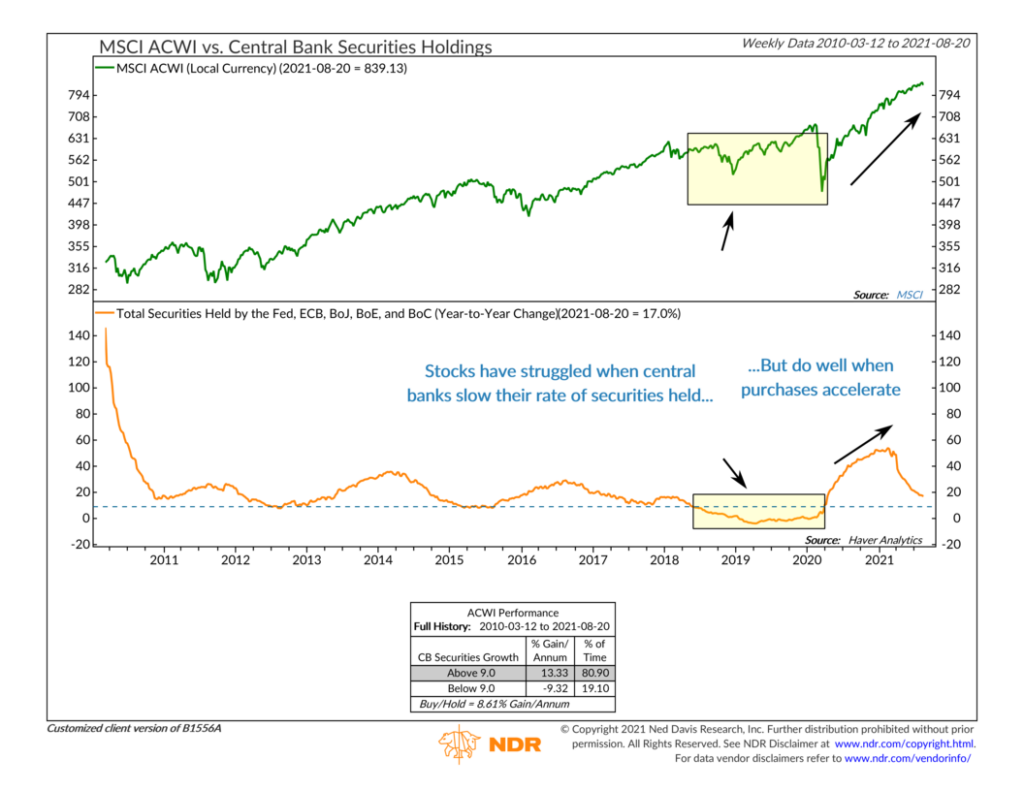 This week’s featured indicator looks at the change in the total securities held by the world’s major central banks over time and how those changes affect global stock market returns.

When Americans hear the phrase “central bank,” we typically think of the Federal Reserve. However, other nations have central banks too. And they all do the same sorts of things—like set interest rates and control the money supply in order to keep inflation under control and ensure the price stability of their currencies.

Central banks primarily buy and sell securities when they want to influence interest rates and the money supply. Securities, in this case, are generally government-issued bonds.

For example, when a central bank buys a bond from a bank, it puts the bond on its balance sheet and “pays” for the bond by crediting the bank’s reserve account that it holds with the central bank. The result is that the bank now has a greater capacity to lend. If the demand is there, the bank will make a new loan, which increases the money supply.

This same process also lowers interest rates throughout the economy because there is more money sloshing around, and the supply of bonds is going down because the central bank is buying them up. This raises the prices and lowers the yields of the bonds that are still out there.

The top clip of the chart shows the MSCI All-Country World Index, the benchmark index for global stock returns. As the performance box at the bottom of the chart reveals, over the past decade, when the year-to-year change in the securities held by central banks is rising faster than about 9% or so, global stock market returns have registered above-average gains.

However, global stock returns have averaged negative annualized returns when that same rate of growth in securities held by the central banks falls below 9%. We saw this play out from about mid-2018 to the end of the first quarter of 2020. During that period, the world’s major central banks were slowing their rate of securities purchases. This reduction in the pace of liquidity hurt stock returns.

But then the central bank ramped up their securities purchases in a big way to combat the pandemic-induced economic downturn. Stocks have been in rally mode ever since.

I would note, however, that the pace has been slowing down. The year-to-year change in the number of securities held by the world’s major central banks has slowed from roughly 50% in the first quarter of this year to about 17% today. This is still the positive zone for global stock returns, but it is something to keep an eye on going forward.