Party With Stocks or T-Bill and Chill? 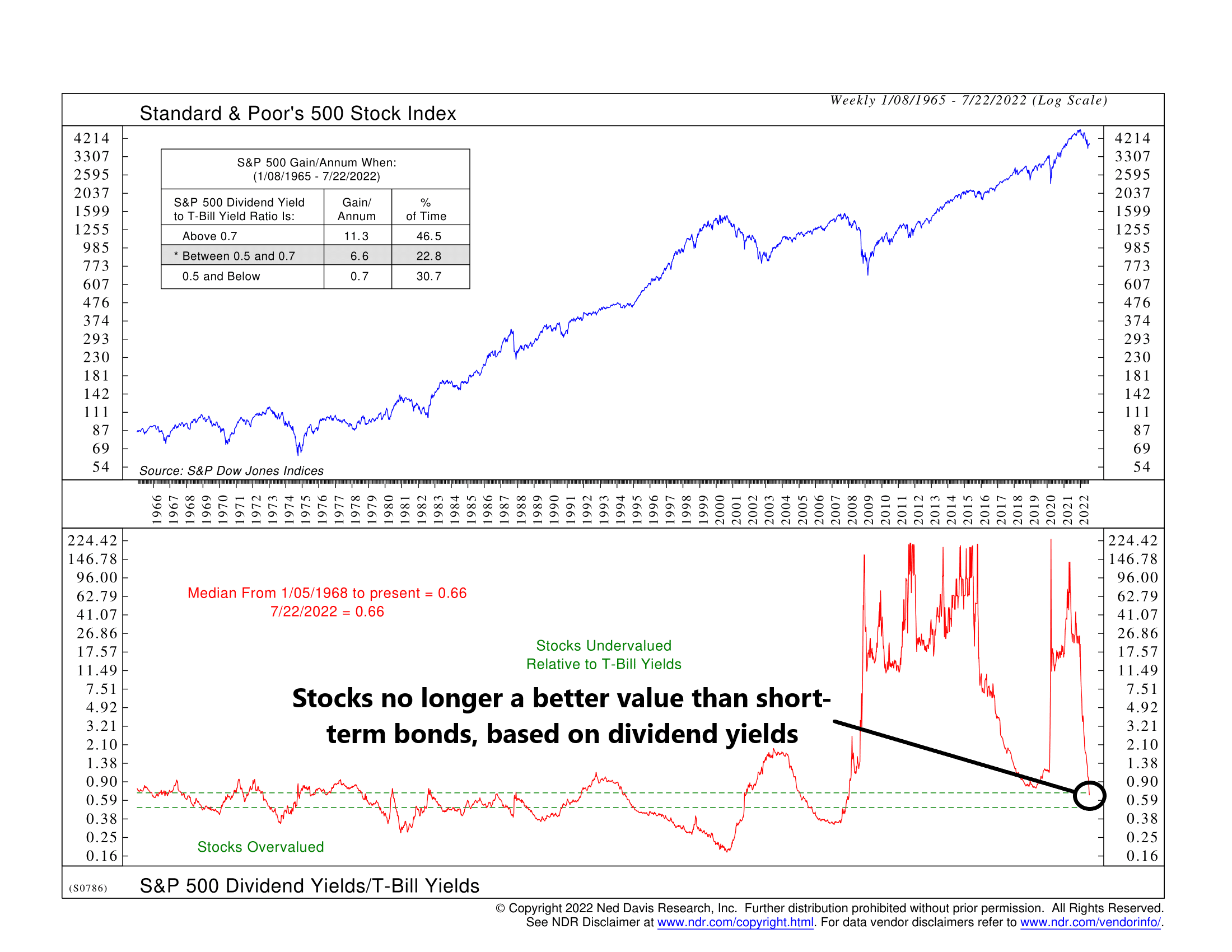 Near the end of the 1990s, two well-known economists, Robert Shiller and John Campbell argued that the high ratio of stock prices to dividends indicated that the stock market was seriously overvalued.

In other words, they thought the dividend yield (dividends divided by stock prices) was too low, meaning investors were willing to pay way too much for the underlying cash flows that the companies in the stock market were returning to investors.

Now, this was a good starting point for valuing the market, but sometimes there are no better alternatives to investing in the stock market. What if the yields on bonds are extremely low? Then maybe low dividend yields don’t look so bad after all.

Our featured indicator, shown above, addresses this issue. Not only does it calculate the dividend yield of the S&P 500 stock index, but it also compares it to the yield on a Treasury Bill (a short-term government bond). This is the red line on the bottom clip of the chart, and it represents the ratio of the S&P 500 dividend yield to T-Bill yields.

Why do we do this? Because by comparing the stock market’s dividend yield to T-Bill yields in this way, we are putting the two assets on a level playing field. In doing this, we let the data tell us which is a better value from a relative valuation perspective.

The historical performance of the indicator, shown on the box in the upper left corner, speaks for itself. When the dividend-to-T-Bill ratio has been higher than 0.7 (the upper green dashed line), it’s a sign that stocks are undervalued relative to T-Bill yields. The S&P 500 has returned roughly 11% per year, on average, when this is the case. However, when the dividend-to-T-Bill yield has fallen below 0.5 (the lower green dashed line), the S&P 500 only returns around 0.7% per year.

Currently, this measure is between the two dashed lines, a neutral zone for stock returns. It fell into this zone last week for the first time since 2008.

This is significant because, as you can see, for the last 14 years, this indicator has signaled that the stock market was undervalued relative to T-Bill yields. This was primarily driven by the low-interest rate environment during this time, which pushed T-Bill yields down and this indicator up. No doubt this contributed to the decade-plus long bull market in the stock market.

Now, however, T-Bill yields are rising fast. And according to this indicator, stocks are no longer a better value relative to short-term bonds, based on the dividend-to-T-Bill ratio.

The good news is that this indicator has only fallen into the neutral zone, where the S&P 500 has historically returned around 6.6% per year, on average. That’s not great, but it’s certainly not terrible, either.

The bad news, however, is that the trend is down. If the ratio of dividends-to-T-Bill yields falls further from here, it could put the stock market in a tough place historically.