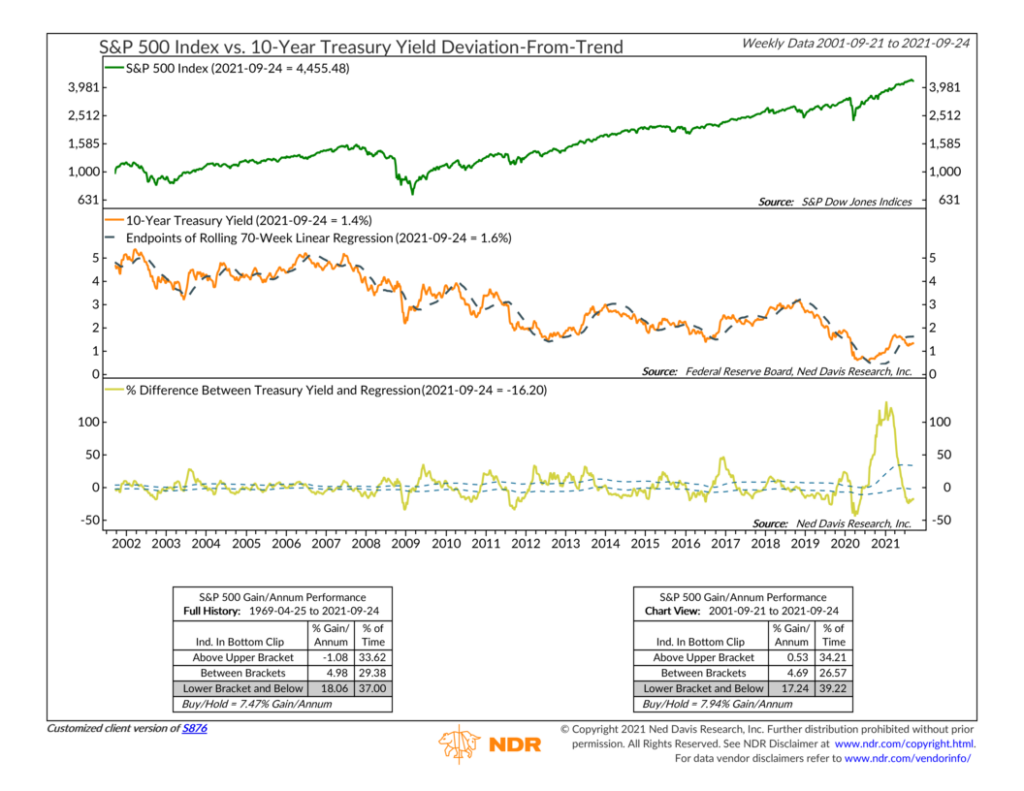 Interest rates have been a big story in the financial markets this year. They shot up like a rocket ship to start the year. But then they fall back down to earth just as quickly. And now, they are starting to edge higher again.

So, for this week’s featured indicator, we look at a way to assess the speed of interest rates moves—and how these moves can potentially affect stock returns.

First, let’s walk through the three sections of the indicator shown in the chart above.

The top section is the S&P 500 Index (green line), the benchmark index for the 500 largest publicly-traded companies in the United States.

In the middle section, we have the most commonly used benchmark of interest rates in the United States, the 10-year Treasury yield (orange line). The black dashed line is the rolling 70-week linear regression line of the 10-year Treasury yield. This can be thought of as a simplistic estimate for where investors might think interest rates “should” be.

And in the bottom section, we plot the percentage difference between the 10-year Treasury yield and the endpoints of the 70-week linear regression line. In other words, the gold line is how far the orange line is from the black dashed line in the middle section. We also use standard deviation brackets (blue dashed lines) to determine just how high or low interest rates are currently trading relative to their recent trend.

Ok, there’s a lot going on there. But the main takeaway is that the speed of interest rate changes matters just as much—if not more so—than the level of interest rates. The historical record shows that when the percentage differential (gold line, bottom section) rises at a pace faster than 0.4 standard deviations (upper bracket) above its 3-year average, it’s been a negative signal for stocks.

Stated differently, a quick spike in bond yields, even from low levels, can lead to bearish conditions for stocks. That’s why we are watching this particular indicator at the moment. Although the 10-year Treasury yield is still below its recent trend, a fast spike from here could push the indicator from bullish to bearish in a short amount of time.

This is good “tiering” for an indicator. Overall, we think this makes it a useful tool when it comes to assessing interest rate changes and how they affect subsequent stock market returns.