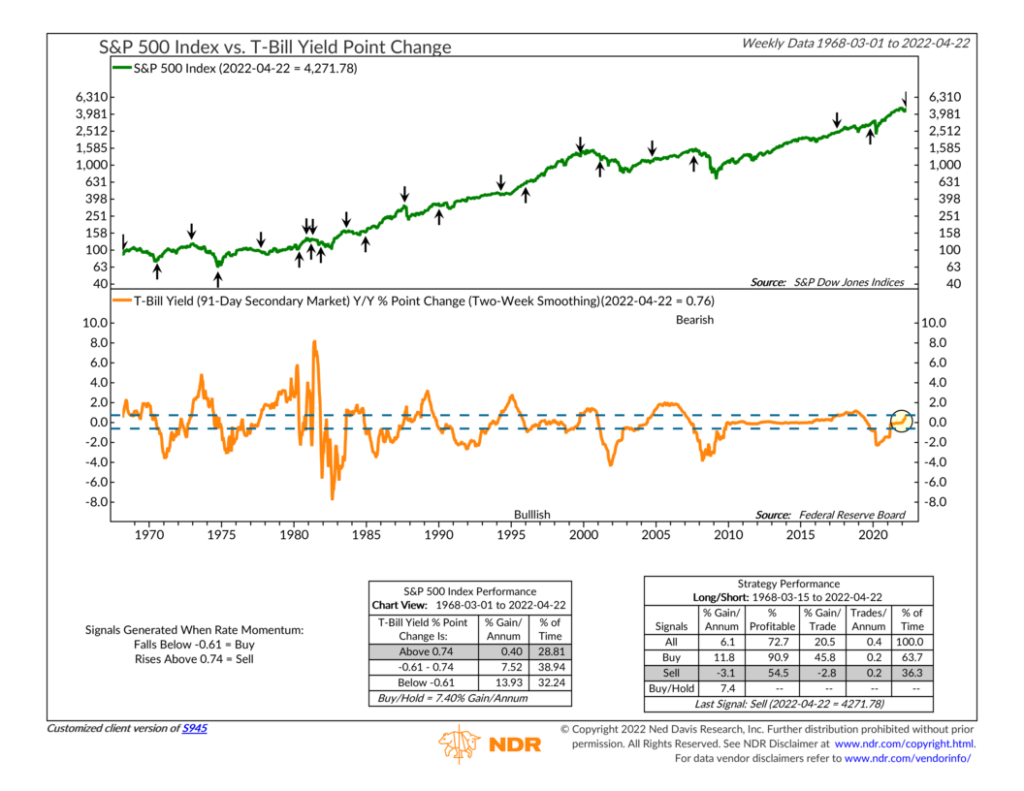 A T-Bill, or Treasury Bill, is a particular type of short-term government bond that the U.S. Treasury Department issues with a maturity of one year or less. In our case, we focus on the 3-month (91-day) T-Bill. To form the indicator, we take the year-to-year percentage point change in the 3-month T-Bill yield and then average it by two weeks to dampen volatility. In other words, we just want to know how much the yield has changed over the past year, and then we smooth that by two weeks. This is represented as the orange line on the chart above.

The performance boxes tell the story. Historically, when T-Bill Yield Momentum has risen above 0.74, it’s a sign that short-term rates are surging, and, as a consequence, stocks have struggled. The average annualized return for the S&P 500 stock index (green line, top clip) has been -3.1% after a sell signal from this indicator.

We recently received a sell signal from this indicator, as the yield on the 3-month T-Bill has risen more than 0.74 percentage points from where it was last year (which was virtually 0%). This is most certainly due to tighter Fed policy, as the nation’s central bank has started to raise interest rates to cool inflation. According to our indicator, stocks tend to struggle when rates move up quickly in anticipation of tighter financial conditions. And that’s precisely what we’ve seen lately.

So, the bottom line is that if short-term government bond rates are falling sharply, it’s probably a good time to be invested in stocks. However, if those same rates are rising rapidly, as we’re seeing now, it probably makes sense to pare back your stock exposure.