Consumer Discretion – One thing that stands out when I look at the U.S. stock market over the past month or so is the relatively strong performance of the S&P 500’s Consumer Discretionary sector. It surged more than 15% over the course of about a month. And with that surge, it crossed above a 13% weighting in the S&P 500, overtaking Health Care as the second-largest sector in the index. 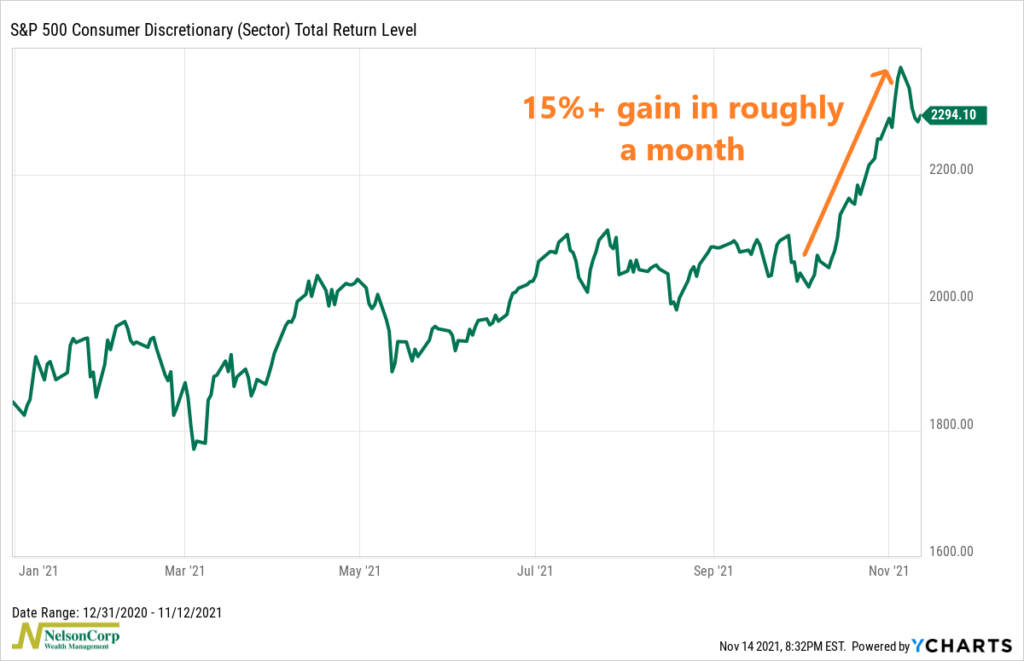 Why is this noteworthy? Because the consumer discretionary sector is made up of companies that produce products that are considered non-essential by consumers. Only if available income is sufficient to purchase them will people choose to buy discretionary goods—hence the term “discretionary.” So, if the stocks of companies that produce these types of goods are going up strongly, it must mean investors think that people are feeling good about their finances and, in turn, are going out and buying plenty of non-essential goods.

And yet, here’s the U.S. Index of Consumer Sentiment, a survey put out by the University of Michigan that tracks how people say they feel about their personal finances, business conditions, etc. Surprisingly, it dropped to its lowest level since late 2011 this month. That’s even lower than during the March/April 2020 period, when the pandemic first crushed the economy. 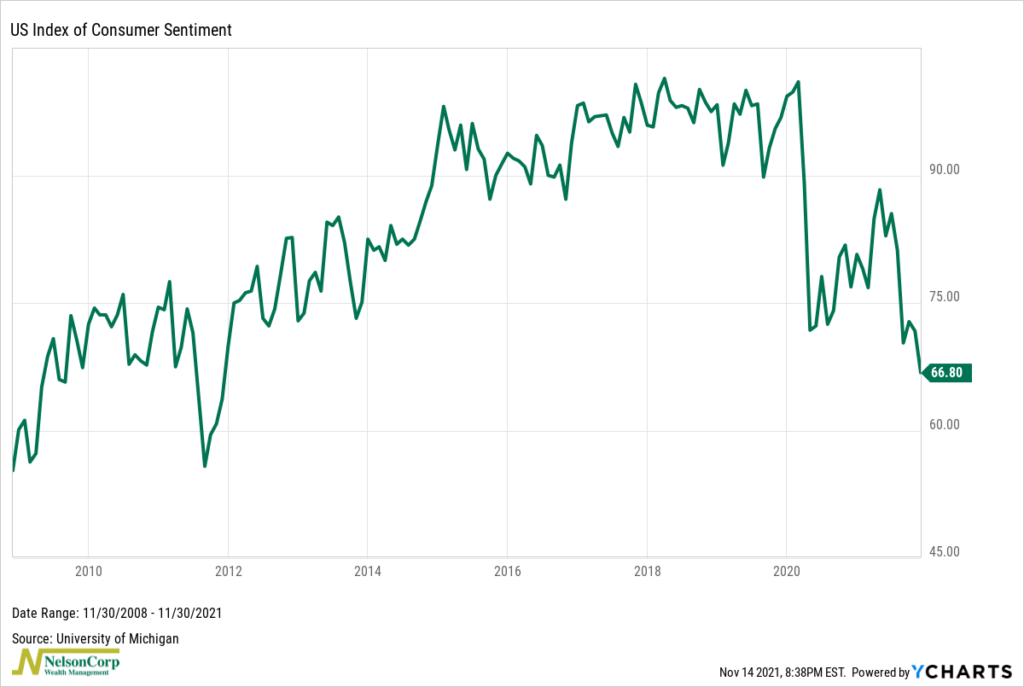 So what gives? Well, we can’t say for sure, but one thing that really matters to people is inflation. Highly visible prices like food and gasoline have risen a lot this past year, which really puts a damper on people’s moods.

Here’s the latest Consumer Price Index (CPI) reading for October. It rose 6.22% from a year ago, above the average 2.3% gain over the past 30 years. 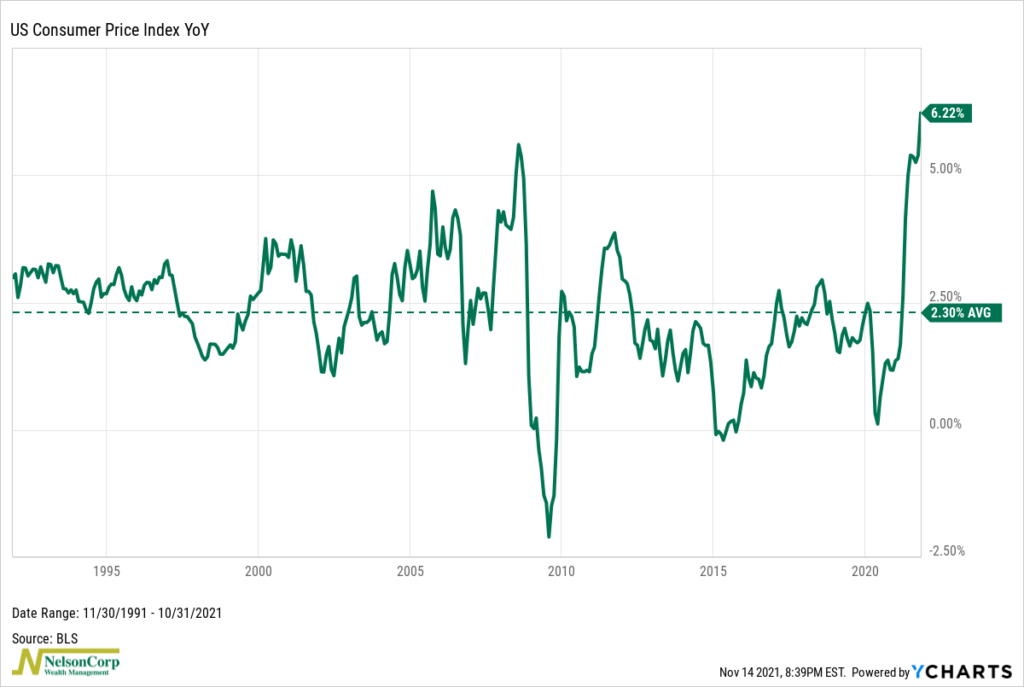 Economic textbooks will tell you that if people expect prices to be higher in the future than they are today, then they will want to go out and buy stuff now. That makes some sense and may explain why consumer discretionary stocks are doing so well lately. However, I’m not entirely convinced that’s the exact calculus that goes through people’s heads when they go out and buy a new pair of pants or take their partner out to dinner at a fancy restaurant.

An alternative explanation could be that financial conditions are extremely “easy” right now, and that’s driving people to spend more. The chart below shows the month-to-month change in total consumer credit outstanding in the United States. As you can see, it has hit several record highs this past year, with the current reading of $29.91 billion roughly 3x the historical average of $10.5 billion. 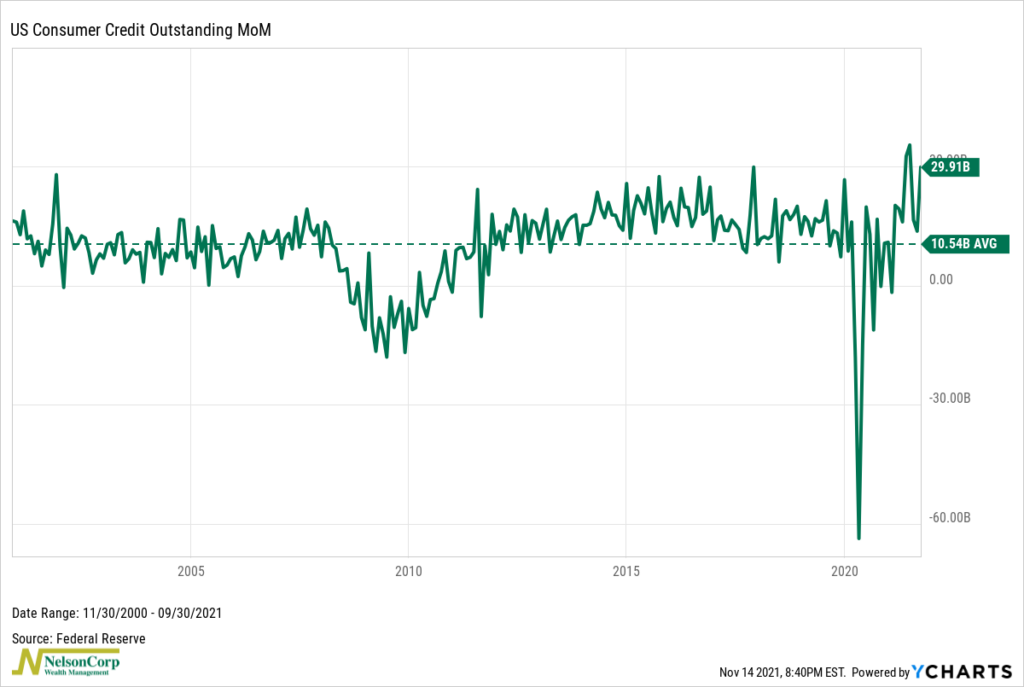 So whether or not any given household has seen its wealth rise substantially this past year, they do still have plenty of access to credit. And if you give Americans credit, they’ll spend it. They might not be happy about it, but they’ll still go shopping.

So maybe the consumer discretionary stocks are telegraphing that we are heading into a potentially record-setting holiday season, despite the dour consumer sentiment surveys. Indeed, according to the National Retail Federation, consumers are expected to spend $851 billion this holiday season, a 9.5% increase from last year’s record $777 billion and more than twice the 4.4% average increase over the past five years.

The takeaway from all this is that it’s probably a good thing that these economically sensitive stock market sectors are doing so well. More participation—or breadth, as we call it—is typically a good thing for the stock market overall. Indeed, up until about a month ago, one of our main breadth indicators that tracks the percentage of stocks trading at a new 52-week high had been falling from its March high of about 28%. However, the measure bottomed out around 6% and rose to roughly 15% a week ago. This is the type of price action that we like to see—and would like to see get even better going forward.