Moving Towards the Middle

Growth stocks lagged, rising about 0.23% versus a 1.21% gain for value stocks. Small-cap stocks were also a laggard, increasing just 0.09% for the week.

International stocks were also up for the week. Developed country stocks rose 0.26%, and emerging market stocks 0.84%.

Moving Towards the Middle – A lot of the data I’ve seen lately seems to be saying that we’re approaching a more neutral stage of the bull market. You might call it the middle ground. Now, I say approaching because we aren’t quite there yet, and the environment still leans to the bullish side of things. But various areas of the market have gotten less bullish as the year has progressed.

Take breadth, for example. I like to start with breadth when assessing the technical health of the market. The chart below shows the percentage of stocks in the S&P 500 trading above their average 200-day price, generally considered the gold standard for long-term price trends. 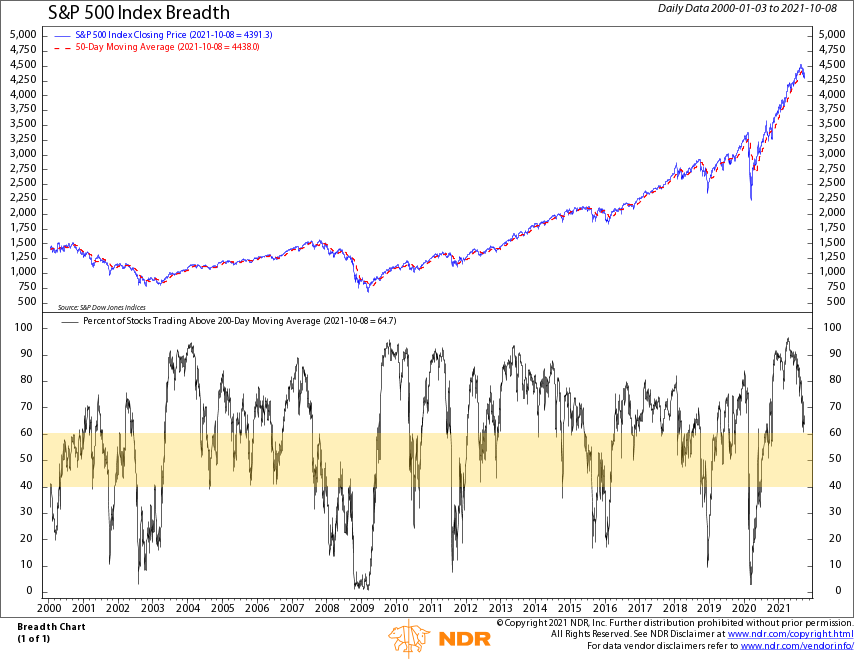 Currently, the measure is about 65%. Historically, anything between roughly 40% and 60% (the highlighted area) is considered a neutral zone for stock market breadth, where S&P 500 returns have been roughly on par with the average. As you can see, we’re still in a positive zone, but we’ve come a long way down from the peak of well over 90% earlier this year. This likely means returns will be harder to come by if this downward trend in breadth continues.

But why is breadth deteriorating? One of the reasons is that economic growth peaked earlier this year. The fastest pace of economic growth is likely behind us. The OECD U.S. Composite of Leading Indicators is an excellent tool for determining where the economy is going. It has fallen from its historically high level earlier this year to what we would consider a neutral zone currently. It looks a lot like the breadth chart.

I would note, though, that if we are entering a stage where more mid-cycle dynamics are taking over, it doesn’t necessarily mean that stock returns will be poor; it just means they will likely be lower than before. Historically, the S&P 500 has returned about 13.4%, on average, during the early cycle of an expansion period. That’s on par with what we are currently experiencing. If we enter a mid-cycle period, returns have historically been about 9.7%. That’s still a very solid return.

So, the bottom line is that it’s a bull market until proven otherwise. But given some of the deterioration we’ve seen, it probably gets a tad bit harder from here.