The Glass is Half-Full…and then Some

Emerging market stocks once again had a good week, posting a 0.99 percent gain.

The yield on the 10-Year Treasury bond ended the week around 1.878 percent, a decline from last week’s close of 1.918 percent; bond prices rose across the board as a result.

Commodities and real estate had positive returns last week, with the most significant gains coming from gold and oil.

The U.S. dollar, however, suffered its third weekly decline in four weeks.

One of the simple, fundamental principles of the stock market is this: When interest rates go up, stocks go down, and vice versa.

In general, stocks don’t like rising interest rates because it raises the cost of doing business, which depresses corporate earnings, and also makes bonds relatively more attractive than stocks to investors.

For example, the chart below plots the 30-Year Treasury Bond Yield (a standard measure for long-term interest rates) relative to its average yield over the past 200 days. The S&P 500 Index is then plotted on top to represent the performance of the stock market. 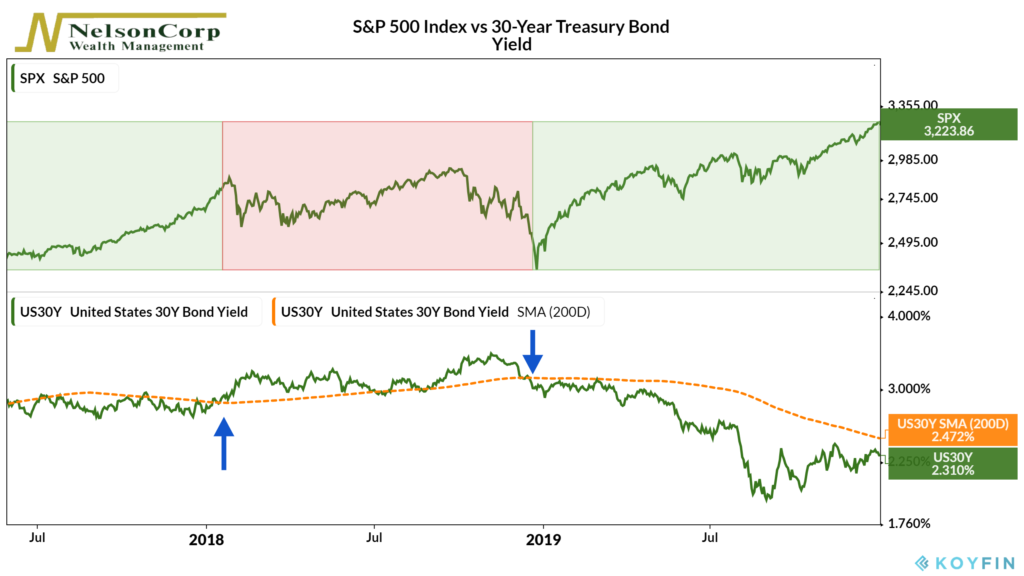 As can be seen, when the 30-Year Treasury yield rose and persistently stayed above its 200-day average yield (the orange dotted line) near the beginning of 2018, the stock market entered a period of congestion, and ultimately ended the year in negative territory.

But when interest rates then fell and stayed below the 200-day average line, the stock market took off and hit multiple new highs in 2019. Sometimes it’s just that simple.

The Glass is Half-Full…and then Some – Having an optimistic attitude about the stock market, particularly in the long run, is generally a prudent thing to do.

Innovation and technological improvements tend to boost productivity over time, which grows the economy.

However, sometimes optimism can get excessive, particularly over short- and intermediate-term horizons.

We find that, on average, when bullish sentiment reaches exceptionally high levels, it frequently coincides with an intermediate-term peak in stock prices.

A composite of different sentiment readings that we monitor has recently reached a level that signals excessive optimism.

If this reading reverses, it could indicate at least some short-term bumpiness as stock prices adjust to the underlying fundamentals.