After a shortened week of trading due to the holidays, the S&P 500 Index gained nearly one percent, as growth and small-cap stocks drove the U.S. stock market to new heights.

The tech-heavy Nasdaq Composite did even better, gaining 1.71 percent.

Developed country stocks had a decent week, rising about half a percent. Emerging market stocks, however, fell about 0.8 percent.

There wasn’t a whole lot of movement in interest rates last week, resulting in relatively subdued gains for most fixed-income assets.

High yield and corporate bonds both rose just under half a percent.

Whereas the U.S. dollar remained roughly flat for the week, commodities sank on the back of lower crude oil prices.

Happy Spending – Well, it’s that time of year. As families gear up for the holidays, their wallets come out, and the business world looks to the data on retail sales to gauge the health of the U.S. consumer.

So, where do we stand, and what is to come?

For starters, although retail sales dropped below two percent on a year-over-year basis in October, they were still in positive territory by a good margin.

The results for November will be released in the coming weeks. Any figure above zero means the U.S. consumer is spending at a higher rate and supporting the economy.

However, as some may remember, the stock market nearly fell into bear market territory last December in anticipation of the drop in retail sales that occurred that same month.

The S&P 500 fell about 5.5 percent in the two months leading up to December. The consumer discretionary sector of the S&P 500 fell in tandem, dropping about 7.5 percent.

This year, however, the S&P 500 has gained about 6 percent over the past two months, while the consumer discretionary sector is only up about 1.5 percent over that same period. 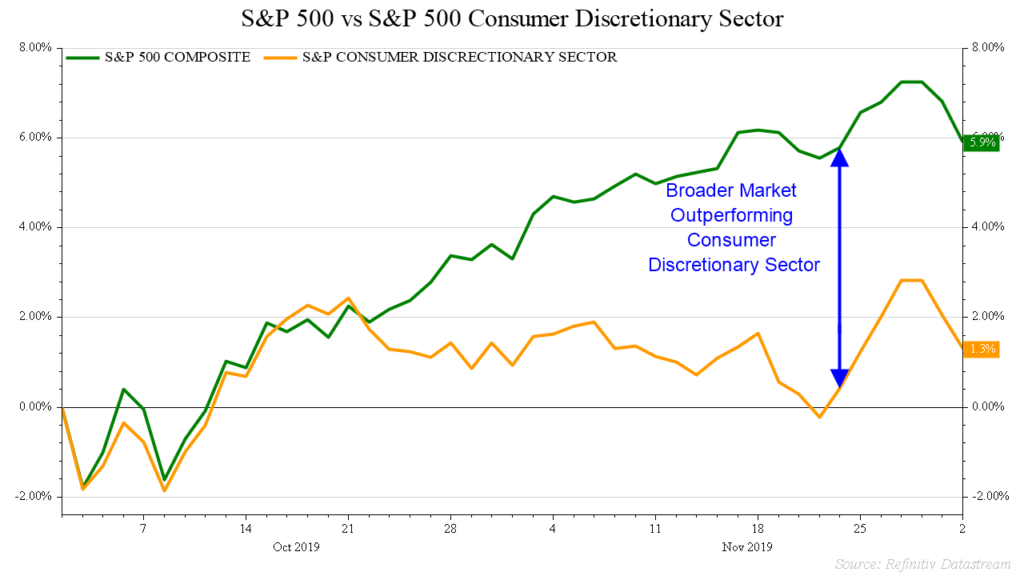 In hindsight, we know that the weakness last year was a sign of more weakness to come.

This year, however, the relative strength of the broader market versus the consumer discretionary sector is potentially a sign that retail sales will hold up this holiday season.

Of course, this is impossible to say with certainty, but it does give us something to monitor.

Our Dear Friend, The Trend –

More importantly, both of the moving averages are sloping upwards.

Big gains in stocks are made when prices are firmly in an uptrend.

It is usually not wise to fight a trending market. And by some technical measures, such as the Average Directional Index (ADX) line, the market is indeed trending.

The environment could change quickly as the year comes to an end, however.

A falloff in retail spending could be one catalyst for a downturn.

Further deterioration in global trade could be another.

There are always dark clouds forming on the horizon; it’s just a matter of how far away from them we are.

For now, the weight of the evidence leans to the bullish side of things.