Neither a Borrower Nor a Lender Be

U.S. stocks hit a rough patch last week, as the S&P 500 fell a little over one percent.

The most severe declines were centered around small-cap and value stocks, which fell about 2.24 and 1.31 percent, respectfully.

Long-term Treasury bonds had a great week as the yield on the 10-Year Treasury fell to 1.734 percent.

Despite the substantial gains in corn and gold prices, the Bloomberg Commodity Index fell about 2.88 percent on the back of a steep decline in oil prices.

Finally, we saw a pick-up in volatility last week, as the CBOE S&P 500 Volatility Index (called the VIX and sometimes referred to as “the Fear Gauge”) rose over 18 percent.

Neither a Borrower Nor a Lender Be – In Shakespeare’s play, Hamlet, Polonius famously warns his son Laertes about the perils of borrowing and lending money, particularly to a friend.

The reason: you will often lose both your friend and your money.

While this may or may not be good advice for an individual, surely it isn’t for the economy as a whole, right?

The idea that “lending money is dangerous” would be a silly mantra for any bank to maintain.

And indeed, that is true. Bank lending is the force that drives our modern monetary economy forward. It is the oil that greases the gears of our economic machine.

However, when loan demand becomes excessive, it imposes a liquidity constraint on banks that is  generally unfavorable for the stock market.

Why? Because as loan demand grows, banks sell their lower-yielding investments in order to fund higher-yielding loans.

The result: money that would typically go into financial assets gets loaned out instead. The upward pressure on interest rates is generally bad for the stock market.

Luckily for stock market investors, however, we find only moderate demand for commercial bank loans at the moment. 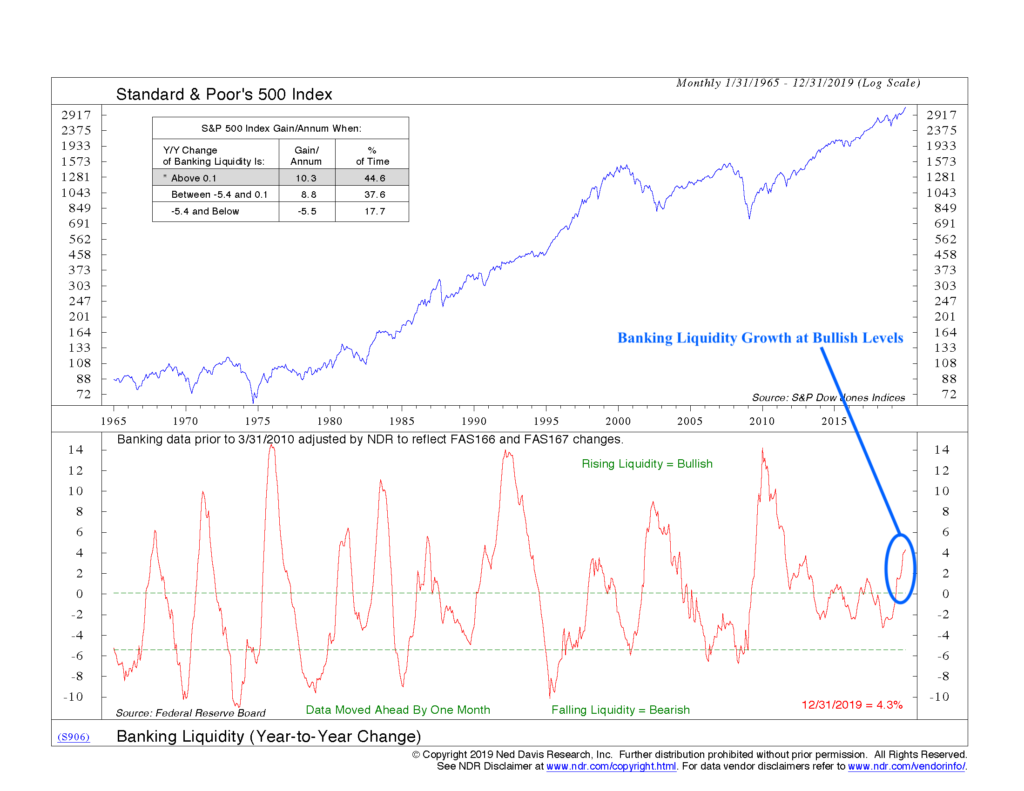 On average, the S&P 500 index has done quite well when banking liquidity is this high.

Steady as She Goes – The other threat to stocks that arises from excessive loan growth is rising inflation, which tends to depress price-to-earnings ratios.

If inflation gets out of hand, the Fed is also liable to raise interest rates to slow down the overheated economy, which can hurt stock prices.

Again, luckily for stock market investors, inflation has not gotten out of control.

In fact, it has remained relatively steady since August 2011, when the core inflation rate in the United States hit the two percent mark for the first time since 2008. It has averaged just under two percent since then.

The recent reading for the core inflation rate was 2.3 percent. So it has risen a bit more recently but remains relatively low.

Deflation (falling prices) is still probably the more significant threat to the economy, given demographic and technological trends.

Of course, deflation could bring its own set of problems for the stock market.

But for now, it appears banking liquidity and inflation remain in a sweet spot for the ongoing bull market.