Implied volatility dropped in the U.S. stock market last week as the S&P 500 index flirted with all-time highs. The U.S. MSCI index posted its largest gain in seven weeks, rising 1.3 percent. It appears that stocks are trying to gain some momentum and break out of their narrow trading range.

International stocks rose in a similar fashion to U.S. stocks, with the AC World ex-U.S. index rising 1.2 percent. About 70 percent of the stock markets around the world rose in U.S. dollar terms last week.

Bond prices, however, were more mixed in their performance. U.S. Treasury bond prices fell alongside municipal bonds, but high yield bonds rose about a third of a percent.

Despite the U.S. dollar’s moderate gain, commodities had a pretty solid week, rising over one percent. Much of this can be attributed to the 5.18 percent gain in the price of oil.

Identifying The Trend – Where is the stock market going? Unfortunately, in a world without magic crystal balls, that question is impossible to answer with certainty. In many cases, however, if you can identify the trend in stock prices, you can raise your chances of making profitable investment decisions. In fact, the purpose of identifying a trend is to remove the noise in the market — all those erratic price movements up and down — and find the general direction in prices.

One of the easiest and most common ways to do this is to calculate the average price of the S&P 500 index over some period. Six months is a popular timeframe to use because it reduces the noise in daily price movements without losing the ability to capture major direction changes. Currently, the S&P 500’s average 6-month price is the highest it’s ever been, indicating that stocks are in an upward trend. 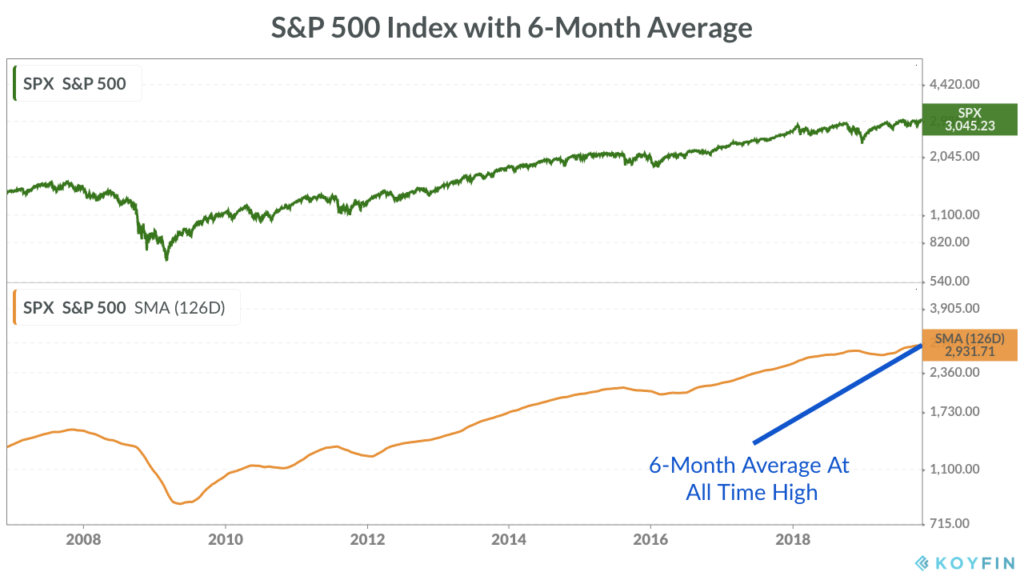 There is no right or wrong timeframe to use when evaluating the trend, but if we stretch the timeline out to years instead of months, it becomes apparent that stocks have been in an area of congestion since the beginning of 2018. The daily price changes look less like a trend and more like waves stuck in a rectangle. Consequently, trend indicators are less accurate as timing tools in this type of environment.

Be that as it may, it is still worthwhile to measure the trend. As we saw last week in one of the indicators that we monitor, sometimes a trend indicator will reverse after signaling a negative outlook, sending it neutral. This fail-safe helps reduce risk. Indeed, if your goal is to manage risk, a neutral portfolio positioning probably makes the most sense in a market that is trading sideways.

In other areas, however, some trend-sensitive indicators have been showing a pickup in momentum and global participation, as stocks try to break free from their congestive zone. For example, the average price of the MSCI World index over the past 200 days has accelerated over this past month to an average gain of 1.4 percent. A rate of change greater than zero in this metric tends to coincide with good gains in global stocks.

As far as participation goes, about 78 percent of global stock markets are now above their average 50-day price. This is quite an improvement from just a couple of months ago when that number was closer to zero.

The Bottom Line – Sticking to the trend is a viable investment strategy in a world where the future is uncertain. Since people are seemingly hardwired to move and do things in herds, this makes sense. Although not all trend strategies work all the time and in every environment, they are still useful tools to have if used in a weight-of-the-evidence system.

Our system says that the trend evidence leans more to the bullish side of things. There is still reason to tread lightly, given the increasingly negative economic data and geopolitical uncertainty. But if stocks can break to the upside from here, a strong rally could form a new upward trend.