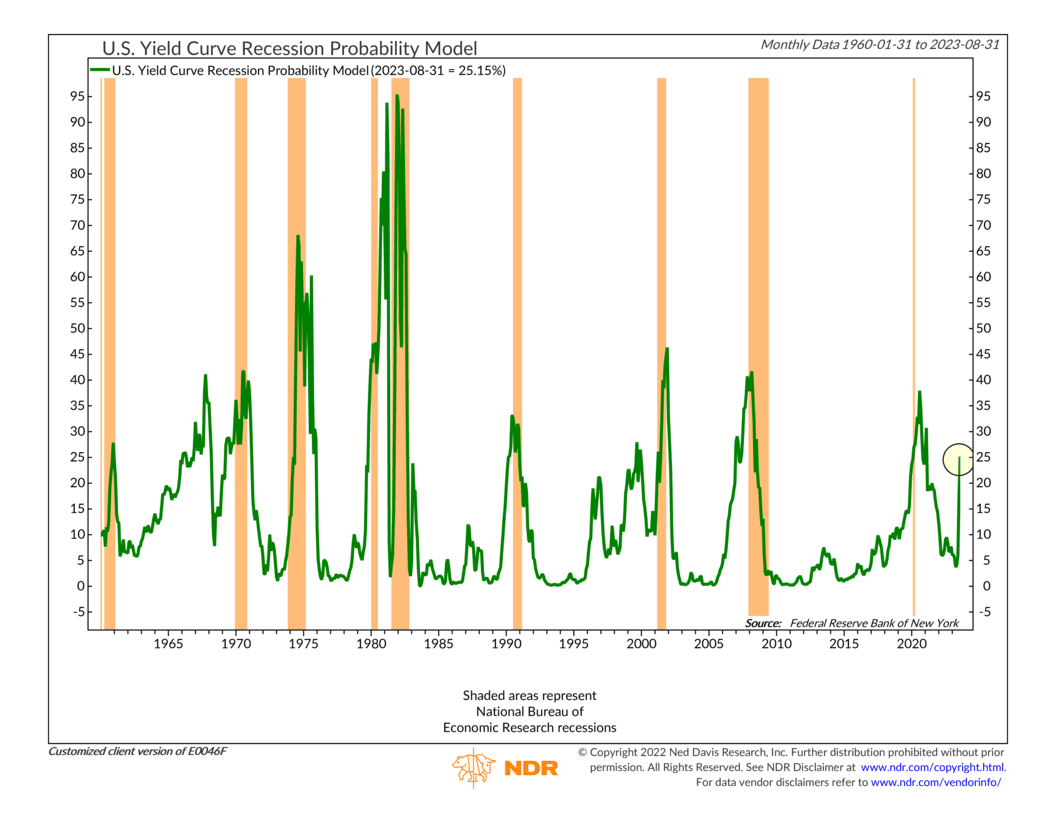 The New York Federal Reserve bank did a statistical study on these two rates and developed a model to predict when a recession is more likely to occur in the next 12 months. Specifically, the New York Fed found that when the 3-month Treasury rate rises above the 10-year Treasury rate—what is called an “inverted yield curve”—an economic recession tends to occur sometime in the following 12 months. Since the 1950s, this model has predicted essentially every U.S. recession except for the credit crunch and production slowdown in 1967.

The New York Fed’s model is based on a statistical methodology called a probit regression. The model forecasts the probability of a recession using the 10-year-minus-3-month Treasury yield curve spread as the sole explanatory variable. This probability is expressed as a percentage and is shown as the green line on the chart above. The higher the percentage, the greater the chance of a recession. Historically, a probability higher than 20%-30% has been enough to predict a recession in the coming 12 months.

Why does this work? It has to do with monetary policy and market expectations. The shorter-term rate—the 3-month Treasury yield—is based on the actual or imminent Federal Funds Rate, which is the rate the Federal Reserve controls. A rise in this rate tends to flatten the yield curve and slow economic growth in the near term. But expectations of future inflation and real interest rates are also embedded in the longer-term 10-year yield. When this longer-term rate turns down and even falls below the short-term rate, it’s a sign that the market is pricing in an economic slowdown or recession.

The orange bars on the chart represents historical recessions. You can see how the recession probability model spiked during past economic recessions, indicating that the yield curve was inverted and thus predicting an economic slowdown.

What’s the model saying now? Well, until this summer, the model predicted a meager chance of a recession. But, over the past two months, the model has gone from a probability of 6% to roughly 25%. This is because, starting around May, the 3-month Treasury rate started accelerating faster than the 10-year Treasury rate, resulting in a flattened yield curve. The spread between the two rates has gone from about 2.2 percentage points in May to just 0.22 percentage points today. While not inverted yet, that is enough for the model to predict a 1 in 4 chance of a recession in the next year.

This will be something we will be watching closely in the months ahead because an economic recession could lead to more pain for the stock market, particularly if corporate earnings come under pressure. On the flip side, however, if the yield curve manages to avoid a full-blown inversion and the economy sidesteps a recession, it would likely mean better prospects for the stock market.